You can enroll with or without a dance partner! 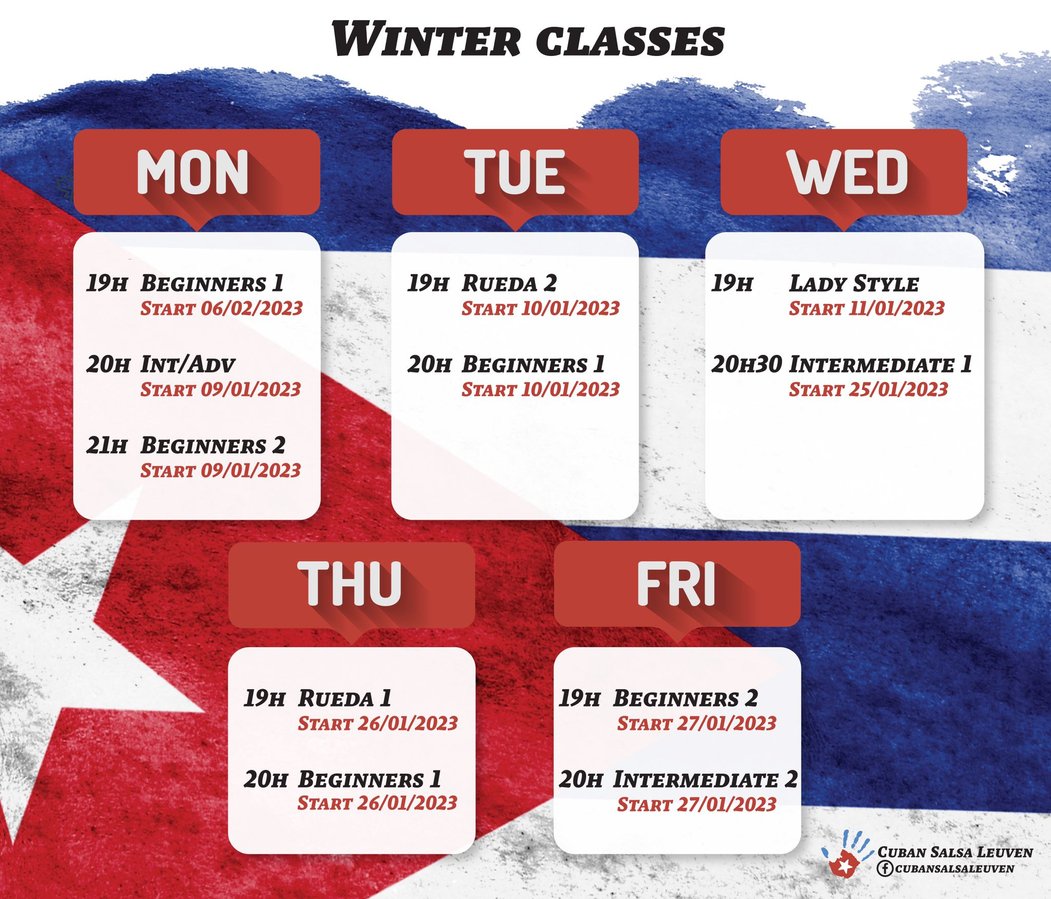 Enroll for the winter classes !! 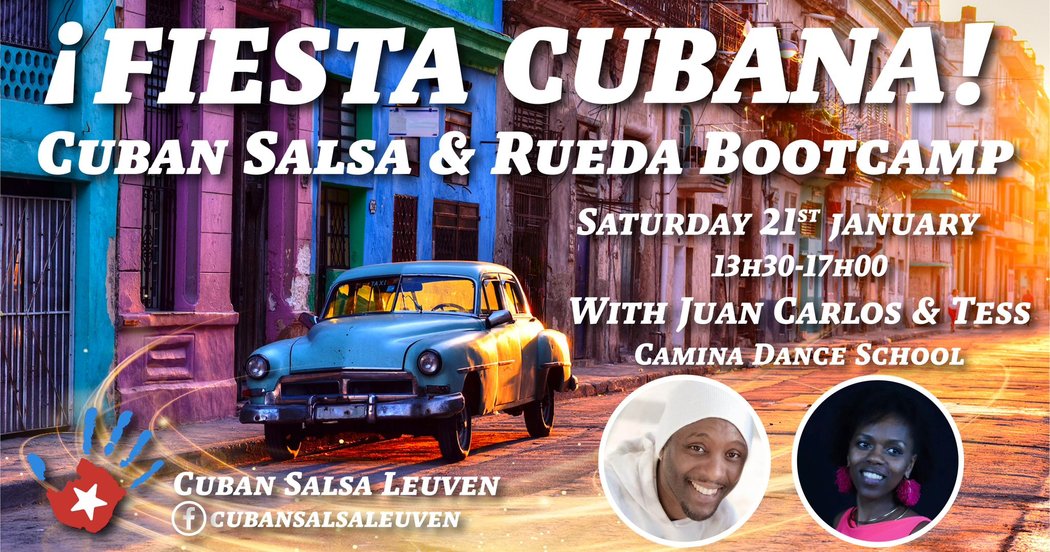 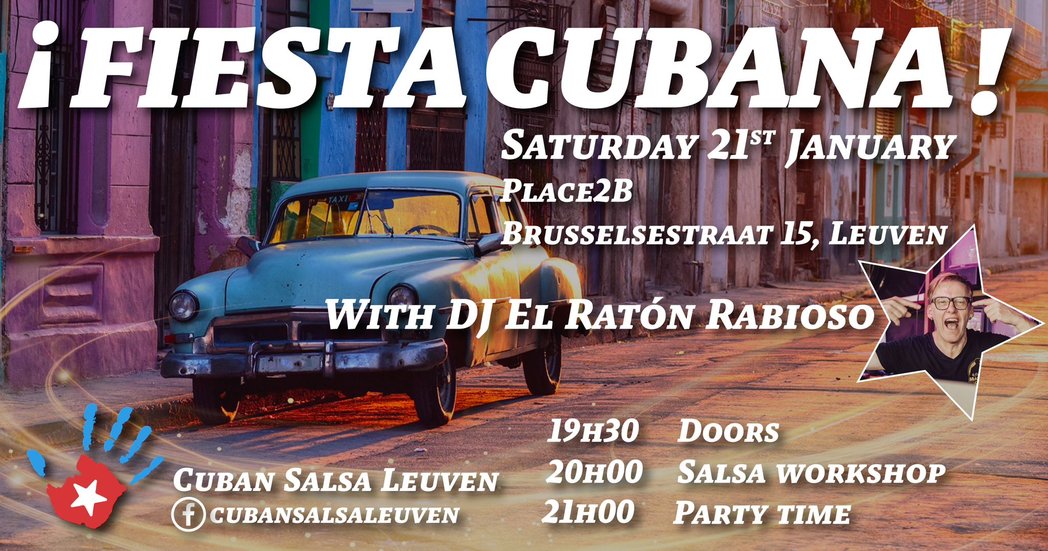 Cuban Salsa Leuven offers weekly partnerwork classes from absolute beginners to advanced, rueda de casino and lady style. We believe everyone can enjoy the pleasure of dancing salsa and we promise to help!

Cuban Salsa Leuven is the only dance school in Leuven which is 100% dedicated to Cuban salsa.

Salsa is not only the steps: it is a specific way of movement, it is the culture and the history of Cuba, and – most importantly! – it is learning to enjoy and lose yourself in the dance. We believe that everyone can experience the pleasure of dancing Cuban salsa and we promise to help!

Discount of € 10 for combining two series.

THE MUSIC THAT STARTED IT ALL

Cuban Salsa is one of the most dynamic and important musical phenomena of the 1900s. In many Hispanic communities, it remains today the most popular style of dance music. Salsa represents a mix of Latin musical genres, but its primary component is Cuban dance music. The roots of salsa originated in Eastern Cuba (Santiago de Cuba, Guantanamo) from the Cuban Son (about 1920) and Afro-Cuban dance (like Afro-Cuban rumba). There, Spanish and Afro-Cuban musical elements were combined, both in terms of rhythm and the instruments used. By mid-century, this music came to Havana. Cuban and Puerto-Rican musical communities in New York merged the aforementioned Cuban as well as Puerto-Rican musical styles with modern influences, particularly American jazz and popular music heard on the radio - and Salsa was born. It then spread back to the South and gained popularity in many Latin countries. On different locations, the musical style evolved differently. After the North-American influence, Cuban salsa was born in - you guessed it - Cuba.

The key instrument that provides the backbone of a salsa song is the clave. It is often played with two wooden sticks (called clave) that are hit together. For salsa, there are four types of clave rhythms, the 3-2 and 2-3 Son claves being the most important, and the 3-2 and 2-3 Rumba claves. Most salsa music is played with one of the Son claves, though a Rumba clave is occasionally used, especially during Rumba sections of some songs.

Don’t worry if these terms sound like a foreign language to you! We’ve all been there. Sometimes it helps the beginner dancers to have a clear idea of the melodic and rhythmic structure in Cuban salsa so that they can synchronise their movement with the music. The more you dance, the less you need to focus on these technical details. At some point, you realise that your body just feels the music and instinctively does the movements that fit well with the rhythm and melody. It just takes some practice, like everything in life.

THE DANCE THAT MAKES YOUR HEART HAPPY

Nowadays people refer to the music as “salsa” and the dance as “casino”. In Cuba, dancers used to get together in large halls, called ‘Casinos’, hence the name. Some say it started in Santiago de Cuba, others say it started in the famed Casino Deportivo in Havana or the Casino de la Playa. When the casinos were closed, people still referred to the dance style by using the name of the places where dancers used to gather to do it: “casino” and the name stuck.

Cuban casino dance differs from the North-American salsa styles in that it is ‘circular’ rather than linear. The man constantly moves around the woman in a circular dynamic, checking her out and showing her off. Exhibela! It this playful interaction between the partners that makes dancing so much fun.

In partnerwork, the two partners have different roles - one is the leader and the other one the follower. Usually, the man is dancing the leader steps and the woman is responding with follower steps. But since we live in the twenty-first century and in an open-minded society, the leader and the following role is not strictly linked to gender anymore. Anyone can be the leader or the follower in a couple and couples don’t have to be mixed! The only rule is that you dance the steps you are most comfortable in. The terms ‘leader’ and ‘follower’ can be sometimes misleading. The leaders use their movement to signal to the followers which figures should follow next. If the communication is good, the followers know what to do and follow that lead. But that doesn’t mean that the followers don’t have a mind of their own and that the entire dance depends on the leader. On the contrary, it takes two to dance! The followers can respond to the lead in different ways, adding ‘flavour’ to the figures or even trying to change the course and dynamics of the dance.

Maybe you wonder: What is the flavour that you mentioned earlier and why is everybody talking about it when it comes to salsa? Well, salsa in Spanish means ‘sauce’ and the ‘sauce’ or ‘flavour’ is that extra element that is incorporated in the movement and that makes the dance truly special and enjoyable. It is the thrill, the passion, the soulfulness, the playfulness and the sexiness of movement that really makes the dance great. When you connect all of these things with the intoxicating rhythm of Cuban salsa, casino dance becomes truly addictive. Think of it like this: the bowl of spaghetti represents the basis of the dance - the figures, consisting of fixed steps that every casino dancer knows. The creamy sweet and spicy sauce that is poured over the spaghetti is the subtle yet game-changing elements the dancer can add to the steps to make the dance unique. And you know damn well that spaghetti without the sauce is worth nothing!

Casino can be danced in couples but also in a group. The later form of dance is called Rueda de Casino. Couples position themselves in a circle and dance in synchrony with exchanging partners, following the instructions of “Cantante”, the singer. He or she shouts the names of each move to be executed. Most moves also have associated hand signals since it is hard to hear in noisy nightclubs. Moves can be called in quick succession and along with frequent partner exchanges, which creates a very dynamic and exciting atmosphere for everyone involved. The group nature of the dance is unique and makes it quite social. A group consciousness develops to make the Rueda work well—with everyone watching the leader for the calls. Dancers have to open up their sphere of awareness far beyond what is necessary for ordinary partner dancing.